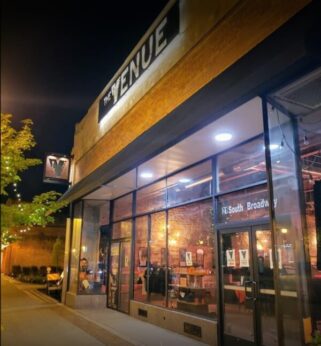 Fox Valley Music Foundation is thrilled to partner with The Pete Ellman Big Band to provide area students with the opportunity to perform before a live audience at Venue. The Big Band Residency Series will take place on Tuesday evenings.

Each week The Pete Ellman Big Band will be joined by an area college, high school, or middle school group that will open the show. Opening performance for this show will feature the students of West Aurora High School!

The Pete Ellman Big Band (PEBB) was formed in 2009 after Pete retired from the Illinois Air National Guard after 20 years of service. Since then, the band has played regularly in the Chicagoland Western suburbs at locations such as Mullen’s in Lisle and Fitzgerald’s in Oak Park. They regularly invite student jazz ensembles to join them and will provide guest clinicians. This is a way to get these budding musicians into a real world environment playing the music they love in addition to an auditorium in front of parents or classmates.

Additionally, the PEBB has hosted numerous fundraisers at their events to help raise money (and food / toys) for local non-profits such as Loaves & Fishes, Toys for Tots, Kids Matter, Kidz Cabaret, Youth Symphony of DuPage, Naperville Educational Foundation, Gil Ellman Memorial Fund, and more! To Pete, it is all about giving back to the community to help kids, in general, and also to give kids an opportunity to participate in the arts.

Pete has worked full time at Ellman’s Music Center since 1985, having worked in nearly every position in the company, from repairman to outside sales representative to purchasing agent to janitor. With that kind of overall experience, he has a uniquely complete vision on how to run the business.

Pete continues to play professionally and has performed with nationally known artists such as Wayne Newton, Lynyrd Skynyrd, Aretha Franklin, Bob Newhart, Chicago Sinfonietta, and many more. Being a trumpet player, Pete’s favorite artist to date has been world renowned trumpeter Wayne Bergeron.

Pete attended DePaul University and majored in Music Performance. Peter attends many industry specific and financial seminars including NASMD, NAPBIRT, and NAMM. He sits on the board of the Naperville Municipal Band.